One of America’s unique traits is its ability to accept newcomers so completely that it sees them as its own, even though their names, accents or histories abroad might clearly identify them as foreigners. Irving Berlin and Harry Houdini, who now seem so completely American, were born east of the Danube. Greta Garbo became an American movie star, as did Arnold Schwarzenegger, though both were clearly European. John Lennon, forever a Liverpudlian, was quite a fervent New Yorker. But Béla Bartók — despite arriving in the United States as one of Europe’s leading contemporary composers and writing some of his most important works here — never became one of our own. Could America have welcomed Bartók with more open arms, or were there other, extenuating circumstances that prevented us from adopting him wholeheartedly?

Certainly there was no question of quality. Bartók’s blend of late Romanticism, Debussy, Eastern European folk music and modernism ranked him among the great pioneers of early-twentieth-century music. His musical language — perhaps best exemplified in his Violin Sonata No. 1, with its highly chromatic yet tonal focus — provided a natural bridge between the dodecaphonic Second Viennese School (Schoenberg, Berg and Webern) and Stravinsky. The Bulgarian folk rhythms incorporated into his music, as in the Scherzo from his String Quartet No. 5, imbue his compositions with a propulsive drive missing from Romantic music. The violin and piano concertos he composed in Europe are brilliant showpieces that have become repertoire staples, and Mikrokosmos, written initially as a primer for his son Peter, is part of almost every young pianist’s education.

Certainly the doors of America were never closed to Bartók, even before his move to New York in 1940. The composer Edgard Varèse conducted Bartók’s Deux Images for Orchestra in 1919 with the New Symphony Orchestra, and the International Composers Guild arranged a performance of his String Quartet No. 2 in 1923. Bartók’s photograph appeared alongside those of Maurice Ravel, Sir Thomas Beecham and Vladimir Horowitz in Vanity Fair’s Hall of Fame in 1927. That same year, Bartók made his debut with the New York Philharmonic as soloist in a performance of his Rhapsody for Piano and Orchestra; he also submitted his String Quartet No. 3, perhaps his most formally and harmonically daring work, to the Music Fund Society of Philadelphia composition competition and won first prize, earning three thousand dollars. Touring had the potential to be quite lucrative for performing composers, and Bartók was able to command a sizable fee. A tour sponsored by the American piano manufacturer Baldwin in 1928–30 earned the composer seven thousand dollars (ninety thousand in 2011 dollars).

America’s generosity was not lacking towards Bartók, who received several important commissions prior to his arrival in the United States. A diverse range of patrons financially supported the creation of Bartók’s works, from the Library of Congress — which commissioned the String Quartet No. 5 — to jazz clarinetist Benny Goodman — who commissioned Contrasts, a chamber work for piano, violin and clarinet. A 1938 recording of Contrasts issued by Columbia Records features Bartók, Goodman and Bartók’s longtime recital partner, the Hungarian violinist Joseph Szigeti.

With all of these high-profile commissions and performances, had history not intervened, Bartók could have perhaps maintained a strong presence in America without leaving his native Hungary. But like so many other politically astute Europeans in the late 1930s, Bartók had to leave his homeland when the government became sympathetic to the Nazis. The fall of Hungary to German-speaking nations must have been extraordinarily painful for the composer, since he was part of a nationalistic generation that shunned the cultural influence of the Austro-Hungarian Empire, preferring to look toward the folk idioms and traditions of the region in search of their origins. We forget that Hungarian-born composers of previous generations, such as the great Franz Liszt [see page 53], did not speak Hungarian, since the educated classes of their day did not consider the Hungarian language worthy of their station; German, the language of Hungary’s Austrian imperialists, was Liszt’s mother tongue. Bartók’s ethnographic work, in which he collected folk songs through on-site recordings and adopted the dress of local peasants, was as much identity politics as it was scholarly research. And so when Bartók arrived in New York at the age of fifty-nine, he may have too closely identified with his Hungarian roots to take on any affectation of his new home. Even though Bartók could speak English very well, while in New York he continued to move in Hungarian circles, having a Hungarian doctor and a Hungarian lawyer.

He settled into life in New York as best he could, living in Forest Hills in Queens and the Riverdale section of the Bronx. Home life was not always happy. Bartók’s wife had a tougher time establishing herself, and this led to a short-term separation. The couple would later reconcile and move into an apartment on West 57th Street, just a few blocks away from Carnegie Hall, where Bartók and Szigeti had performed a few years earlier.

America could do little for Bartók in terms of adding new influences to his compositional trajectory. He admired jazz and implored American composers to draw inspiration from it, but never incorporated it into his own music. America did, however, support his work as a composer through academic recognition. During his first year in America, Columbia awarded him an honorary doctorate as well as a research fellowship, later supported by Harvard, for which he worked primarily on transcribing a collection of Yugoslavian folk songs.

Despite his reputation and despite support from patrons and academia, due to health issues Bartók was not able to take more advantage of these opportunities. He began to complain of stiffness in his right shoulder — a concern for anyone, let alone a concert pianist — but no doctor could pinpoint the cause. Bartók was left undiagnosed until he became feverish, his strength steadily declining during his Harvard lectures. He had leukemia,
a sure death sentence in 1943.

America responded to the composer’s plight with astonishing generosity. The American Society of Composers, Authors and Publishers, of which Bartók was not a member, agreed to pay all of his medical expenses. The Koussevitzky Foundation commissioned Bartók to write an orchestral work for the Boston Symphony Orchestra. A proud man, the composer initially saw both offerings as charity, which he refused on principle. Thankfully, his friends and colleagues convinced him to accept both, and this much-needed support allowed Bartók to write his Concerto for Orchestra.

Thirty-five minutes in duration, this five-movement orchestral work is the closest thing to a symphony that Bartók produced. As the name implies, the members of the orchestra are called on to act as a group of virtuoso soloists, and the work is a veritable encyclopedia of orchestral technique. Many of Bartók’s signature touches are present. The almost mechanical unfolding of intervals at the beginning of the work has its roots in the opening movement of Bartók’s Music for String, Percussion and Celeste. The duets of the second movement recall the kind of writing found in his forty-four Duets for Violin, and the Elegia is one of the best examples of Bartók’s eerie night music, which can be found in work ranging from his Second Suite for Small Orchestra to his Sonata for Two Pianos and Percussion. If there is one work that embodies all of Bartók’s achievements as a composer, Concerto for Orchestra certainly ranks among the candidates. (The work also contains a heavy-handed parody of a melody from Shostakovich’s Seventh Symphony, born of Bartók’s displeasure at the popularity of a work he considered inferior to his own — but perhaps we can forgive Bartók’s indiscretion, since few orchestras were fighting to perform his music the way they fought for contemporaneous Soviet composers.) The Concerto for Orchestra was premiered by the Boston Symphony Orchestra under Koussevitzky’s direction at the end of 1944, to great acclaim by the press and public alike.

Around that time in the early 1940s, the then-young violinist Yehudi Menuhin became interested in performing Bartók’s Violin Concerto No. 2. A meeting was arranged between the two men in late 1943. Bartók had Menuhin read through his First Violin Sonata, and with the composer’s quiet approval, Menuhin commissioned a small work for solo violin. Bartók delivered the Sonata for Solo Violin, a four-movement work that demonstrated his love for both Eastern European folk music and J.S. Bach. The sonata not only rivaled Bach’s work in terms of structure and expression, it became one of the finest works in the repertoire, a feat Bartók had already accomplished with his string quartets, which had become the only meaningful contribution to the repertoire since Beethoven.

As his health began to fail, Bartók’s thoughts turned toward the welfare of his family. His wife, who was also a concert pianist, had not achieved the same level of success as her husband, but the two performed regularly as a piano duo. As a means of ensuring future performance opportunities for her after his passing, Bartók wrote his third and final piano concerto for her. The work, like the Sonata for Solo Violin, fuses elements of folk music with those of a great master, this time Mozart. Shades of Beethoven’s Op. 132 appear in the work’s slow movement, and the finale has the air of a raucous folk dance, but Mozart’s clarity and economy of means influence Bartók’s treatment of his material at every turn. Bartók died before he could orchestrate the last seventeen bars, which were completed by his student, Tibor Serly.

Serly, who in addition to completing the Piano Concerto No. 3 also reconstructed Bartók’s Viola Concerto by completing the work from the composer’s sketches, best summed up Bartók’s American years in the October 1953 issue of The Long Player:

Béla Bartók’s last four major works — all composed in America — represent Bartók at the peak of his creative maturity. Much of this music, unlike many of Bartók’s earlier works, seems by comparison disarmingly warm and mellow. To some this has given rise to the impression that Bartók had made certain compromises. I do not hold this view. On the contrary, I believe that, along with the ever-widening appreciation of Bartók’s greater output, in the end it will become obvious to all that the last four works, more so than all the others, will exert the greatest influence upon future trends in music.

During his time in America (1940–45), Bartók was associated with many important American academic and arts institutions. He wrote not only some of his best works, but some of the best works ever written on American soil. He was not socially at the center of things in New York, but his compositions were performed in all the major markets for classical music in America, including Boston, Chicago, Philadelphia and Washington, D.C. Though not a rich man by anyone’s account, he earned more than Stravinsky and Schoenberg in performance royalties and publishers’ advances, and some tallies of his income have Bartók earning twice that of the average American in the 1940s. He could never become fully American, but the country’s support allowed him to express himself at a time when the world, engulfed in World War II, was collapsing around him. A good steward of Hungary’s greatest composer, even in death, America cradled his bones until his homeland was ready to repatriate his body in a manner befitting a man so closely allied with Hungary’s cultural identity. America cannot really claim Bartók, but we should be more vocal about the works he created here, and celebrate our part in supporting his lasting contribution to the world of great music. 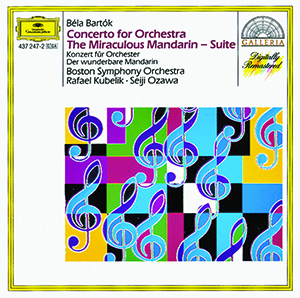 Seiji Ozawa conducts the Boston Symphony Orchestra in the Suite from The Miraculous Mandarin and Concerto For Orchestra, the latter having been premiered by the BSO
(Deutsche Grammophon). 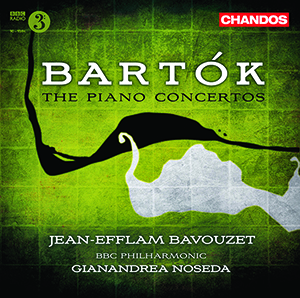 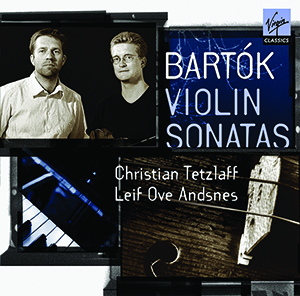