Respighi’s set of variations is cast away for his more
‘Roman’ repertoire.

If Ottorino Respighi had titled Metamorphoseon Modi XII something a touch more appealing, such as The Bus Stops of Rome, we wouldn’t be having this conversation. But no — the famous composer of “Roman” tone poems (the Pines, Fountains and Festivals of Rome) decided to go abstract and call the work exactly what it is: twelve variations (“modi”) that take a lovely, modal theme through an expressive metamorphosis lasting about twenty-five minutes. It ought to be as popular as anything else the composer wrote, but it isn’t, and that title is largely to blame. Indeed, it’s almost impossible to pronounce in a way that makes any sense at all, in any language. In musical circles, the work is usually just called “Metamorphoseon,” with the rest left off for convenience.

Metamorphoseon was commissioned in 1929 by Serge Koussevitzky and the Boston Symphony for its fiftieth-anniversary celebrations in 1930. It was a banner year for twentieth-century music, as an astonishing number of repertory staples were written for the occasion. In addition to the Respighi, contributions included Copland’s Symphonic Ode, Roussel’s Third Symphony, Prokofiev’s Fourth Symphony, Honegger’s First Symphony, Hindemith’s Concert Music for Strings and Brass, Hanson’s “Romantic” Symphony and Stravinsky’s Symphony of Psalms — in other words, a good chunk of what has since become standard orchestral repertoire. Koussevitzky composed an overture of his own for the occasion, which was premiered anonymously.

Respighi’s piece remained almost completely unknown and unplayed until 1985, when it was recorded by Geoffrey Simon and the Philharmonia Orchestra as part of the Chandos label’s ongoing exploration of unfamiliar works by the great Italian composer. This recording is still the one to own, particularly as the piece is coupled with another relative rarity, the suite from the choral ballet Belkis, Queen of Sheba. There are only two other versions of Belkis currently available: a good but not great version on the German MDG label and a worthy performance on Telarc featuring the Cincinnati Symphony Orchestra under Jesús López-Cobos (unfortunately coupled with the umpteenth recording of The Pines of Rome and The Fountains of Rome).

Musically, Metamorphoseon belongs to a rich tradition of theme-and-variation works for full symphony orchestra. The concept dates back at least to the 1870s and Dvořák’s Symphonic Variations. Technically, Brahms’ “Haydn” Variations, though originally conceived as a work for two pianos, came earlier, but its structure and treatment of the theme belong to a much older, classical tradition. In that tradition, the standard form of a theme destined for variation treatment, as established by Haydn in many of his slow movements (think of the Andante from his “Surprise” Symphony, for example), was A–A–B–B — in other words, a tune with two halves, both repeated. As the variations progressed, the second ‘A’ or ‘B’ might also be varied, and in such cases the variation was called “double.”

Dvořák took a different kind of theme for his Symphonic Variations: A–B–A, in which the central ‘B’ section is a rising phrase of yearning character that leads back naturally to the return of ‘A.’ In a sense, this shape mirrors in miniature the form of a symphonic first movement: exposition, development, recapitulation. The idea is to fill up the theme with as many smaller motives and melodic ideas as possible, any of which might serve as the subject of future developments in the ensuing variations.

‘The key to listening to any variation work is simple: know the theme. Good composers make this easy, and Respighi is no exception.’

Dvořák’s concept had many offspring, the most famous being Elgar’s “Enigma” Variations (1899), whose main theme has a very similar shape. Elgar’s work might in turn have served as an inspiration to Respighi, not just in the design of its principal theme, but also in the scoring of the grand finale, with the organ appearing at the final climax to lend a touch of festive solemnity to the triumphant closing pages.

The key to listening to any variation work is simple: know the theme. Good composers make this easy, and Respighi is no exception. His ‘A’ section starts off with an instantly catchy melodic idea that’s easy to spot whenever it turns up later, even if it’s played faster, slower, or in a very different rhythm. It’s scored for the warm tone of strings in their lower register and cloaked in richly modal harmony, almost like a folk song — “Greensleeves” comes to mind. The central ‘B’ section couldn’t be more different. Its anxious melody — scored for solo clarinet and accompanied by pensive, chromatic harmony — wanders nervously back to the opening idea, which sounds even more tranquil after this disturbing interlude. Although the entire melody flows smoothly from start to finish, the contrasts in harmony, scoring and expressive intensity set up a natural tension that the rest of the work exploits brilliantly.

The actual theme isn’t all that long — in Simon’s performance it takes less then two minutes to play at an Andante moderato tempo. So in order to create contrast, Respighi groups the variations into larger units of similar character. Thus the first four variations maintain basically the same tempo (in fact they slow down slightly) while becoming increasingly passionate in expression. You know you’ve reached the summit of this first musical span with the crashing entrance of tam-tam in the fourth variation’s second ‘A’ section. The angst doesn’t last long, however. With the entry of the glockenspiel (the only extra percussion Respighi requires beyond the usual timpani), the tempo increases to Molto vivace for two sprightly variations that together bring the first part of the work to its logical conclusion.

One of the many advantages of writing variations for orchestra is that a composer can give each instrumental section the opportunity to show off. The seventh variation, subtitled “cadenzas,” does just this. It’s the most extended single movement in the work, lasting nearly seven minutes, and its featured instruments, freely rhapsodizing on the theme, include (in order of appearance) harp, solo cello, solo violin, solo viola, horn, bassoon, flute, clarinet (alone, then with the flute), harp, oboe, clarinet, solo violin and finally clarinet again. It’s an affectionate tribute to an orchestra Respighi knew well, and perhaps also a nod to his teacher, Rimsky-Korsakov, whose Capriccio Espagnol contains a movement that does something very similar. 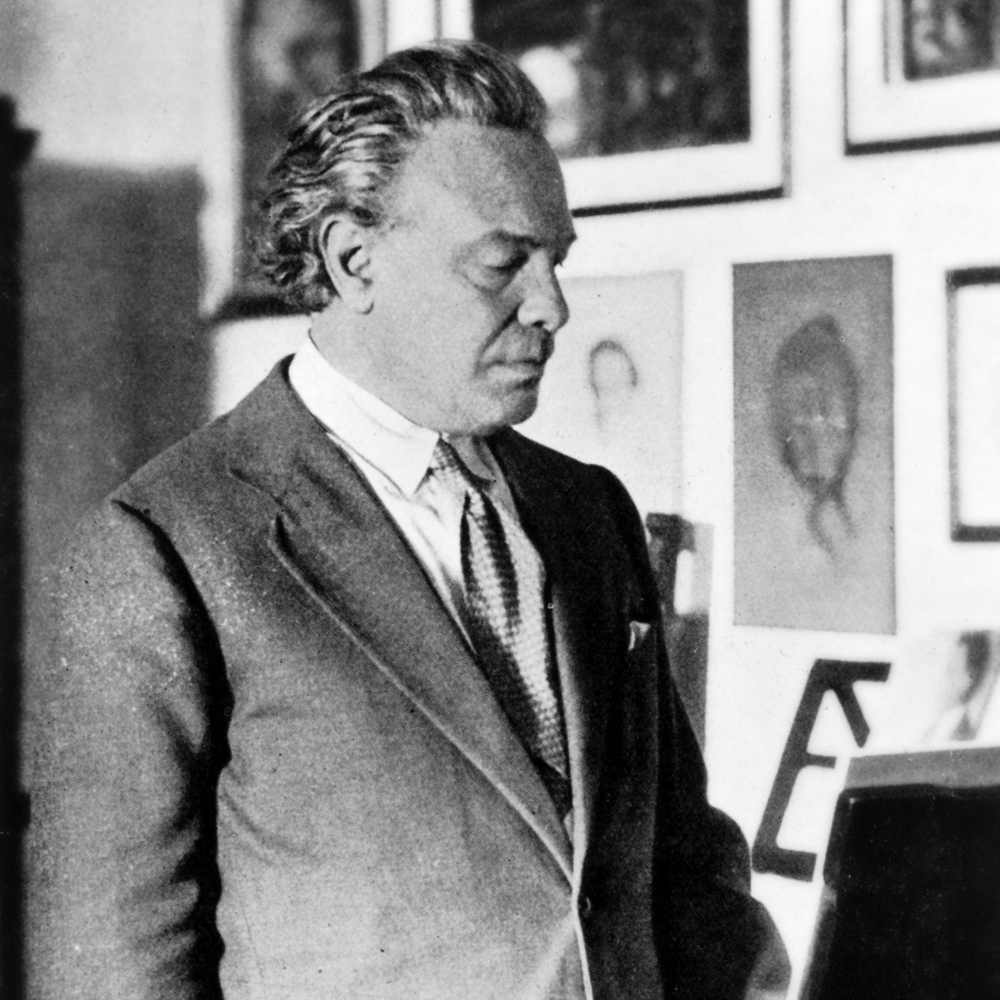 Hot. Respighi’s inventive ‘Roman’ works earned them a popularity not won by an Italian composer since Puccini.

This poetic cadenza section comes at the exact midpoint of the work, and from it Respighi skillfully builds the remaining variations to a grand climax. In Metamorphoseon’s first part, measured speeds predominate: four slow-to-moderate variations are followed by two short, quick ones. After the cadenzas, this process reverses itself: two slow variations are followed by three fast ones. Variation (“Modus”) IX is especially atmospheric, with soft, spooky taps on the tam-tam and a particularly crepuscular ‘B’ section in which the glockenspiel penetrates the texture with startling flickers of light. After this “heart of darkness,” the last group of three variations plays without pause, gradually increasing in volume and excitement, with Modus XII forming an extended coda during which the entry of the organ announces the final, splendid appearance of the theme by way of conclusion.

Metamorphoseon was very well received at its premiere. Critics praised both its melodic attractiveness as well as Respighi’s typically brilliant scoring — another legacy of Rimsky-Korsakov. However, the music is not flashy in the way that the three Roman tone poems are. It requires fewer instruments, and its general mood, despite the presence of lighter episodes, is passionate but serious. It’s no accident that all of the pieces for which Respighi is best known are either lighter in character or tend to have programmatic titles, including not just the Roman trilogy, but The Birds, Church Windows, Brazilian Impressions, the three suites of Ancient Airs and Dances and the Three Botticelli Pictures. There’s a certain prejudice in musical circles against Italian composers who attempt to write music in abstract forms, and this extends not just to Respighi, but to contemporaries such as Pizzetti, Ghedini and the tremendously talented Alfredo Casella.

Respighi created excellent music in just about all of the different forms in which he worked. There’s a fine early symphony and several concertos for piano and violin that certainly don’t deserve their current neglect. But of all the pieces that have failed to receive their due, Metamorphoseon stands at the top of the list. A genuine masterpiece in the genre, it is a warmly expressive and (formally speaking) wholly successful contribution to the repertoire of “symphonic variations.” It may not pack the same wallop as, say, the march at the end of The Pines of Rome, but assuming the presence of a great orchestra — backed by a powerful organ for good measure — it’s difficult to imagine any audience failing to rise to its feet at Metamorphoseon’s thrilling conclusion.