A mammoth box set in celebration of his 225th

drake may have topped the 2016 streaming charts, but, if we eschew “units shipped” for some creative math, it was another one-name artist, Mozart (1756–91), who moved the most physical albums: Mozart 225: The New Complete Edition (Decca/Deutsche Grammophon) sold over six thousand copies in 2016, in excess of one million and two hundred thousand CDs.

Mozart 225 includes all of Mozart’s complete works, as well as fragments, arrangements (of Mozart and by Mozart), dubious works, and alternative performances of some major works for a total of two hundred and forty Mozartean hours. (Remind yourself that the composer was dead at thirty-five.) In addition,  the handsome set includes a new Mozart biography by Cliff Eisen (though your first read should be Maynard Solomon’s), a book of essays, some art prints, an updated Köchel catalog, and access to online Urtext scores.

The period-instrument movement’s influence on how we approach Mozart was profound, and Mozart 225 offers a considered mix of historically informed, historically influenced and historically uninformed (-oblique?) performance. But the biggest influence on our present-day view of Mozart, as it is with all the departed, is the passage of time. Our relationship to Mozart continues to change, nearly two centuries after he left the Earth. 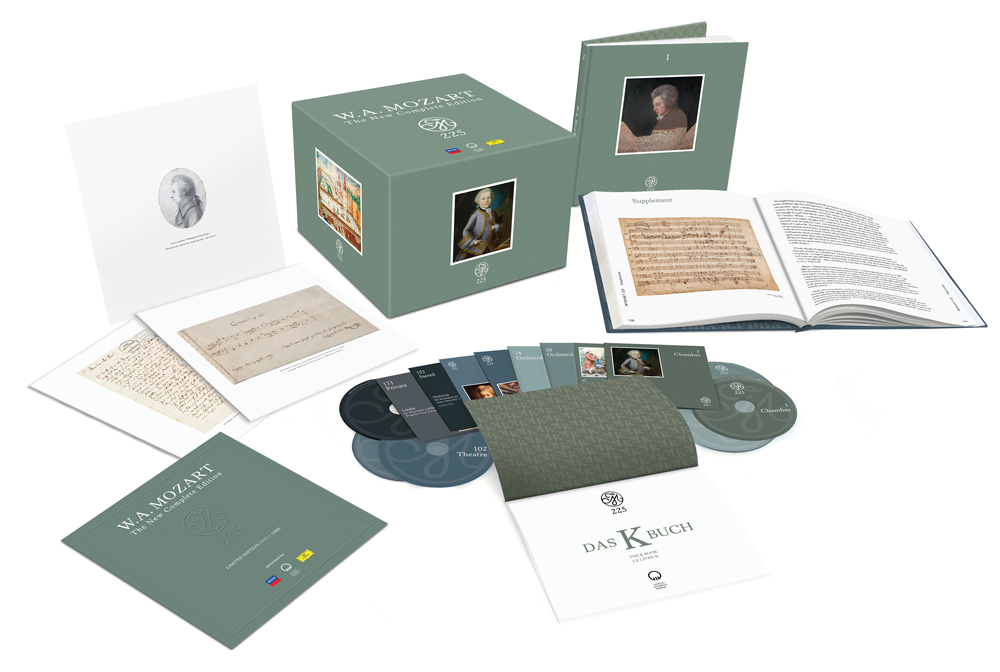 From a programmatic standpoint vis-à-vis twenty-first-century concert halls and record labels, Mozart’s successor, Ludwig van Beethoven (1770–1827) presently eclipses him. Beethoven’s early achievements found him extending the Viennese Classical tradition inherited from Mozart (and Haydn). As Beethoven’s style grew more and more personal, his work grew increasingly profound; he composed many of his masterworks at the end of his life (he had over two decades more to compose than W. A.). Beethoven’s combination of exploration and personal expression led to his stature as the dominant composer of the nineteenth century.

And yet, splashing in this boxed ocean of Mozart — this fully formed genius, this child prodigy who was dragged across Europe as a touring circus act, this prolific creator of pristine melodies, this vulgar, funny, flirtatious, careless man — one rediscovers a
voice so approachable, so honest, so human, that you may, after all these years, have to re-evaluate your friendship.