Up the Hill, Down the Hill

Alpine Symphony seeks out the narrative that underlies all of Western classical music.

Richard Strauss’s Alpine Symphony may be one of the most misunderstood works in the repertoire. A tone poem of epic proportions spanning more than three-quarters of an hour and calling for over one hundred twenty-five musicians, Alpine Symphony marshals a small army of performers to sonically reenact the story of a man who climbs a mountain, encounters a storm on his descent, and returns to safety at close of day. At first glance this lack of detail doesn’t seem to warrant such a large orchestra, but over the course of the work’s twenty-two movements, Strauss recounts in painstaking detail every sight, sound and emotional perspective of the mountaineer on his alpine journey. And yet, despite the composer’s feeling that Alpine Symphony ranked among his best works, it has failed to take hold in the repertoire, not because of its musical substance, but because of the aesthetic and philosophical ideas from which the work was born.

Because of his sure-handed technique and uniquely recognizable composition voice, we sometimes forget that Strauss was a composer who chose not to rest on his laurels, but to explore innovative methods of conception and execution. The remarkable set of six tone poems on which Strauss built his early career are re-explorations of classical forms, inspired by great works of literature or philosophy. Also Sprach Zarathustra (“Thus Spoke Zarathustra”), inspired by Friedrich Nietzsche’s philosophical treatise of the same name (and which most of the public today would recognize as the opening to Stanley Kubrick’s 2001), pushed the limits of orchestra writing through gleaming orchestration and a twelve-tone fugue subject, while in the culminating opus Ein Heldenleben (“A Hero’s Life”), the composer becomes the subject of the work, locked in battle against feeble music critics and quoting themes and melodies from his early songs and tone poems.

After Heldenleben, it’s understandable how Strauss might have lost his sense of direction. He couldn’t really go much larger in terms of size and scope than Zarathustra, and focusing on a more personal story led to charges of egomania — with Heldenleben and its companion piece, Sinfonia Domestica (“Domestic Symphony”). It appears that Strauss simply did not know which way to turn.

He began sketches on several multi-movement versions of Alpine Symphony, but somehow a satisfactory form did not present itself. Instead, Strauss turned his energies toward opera, where in the space of another ten years he produced Salome, Elektra, Der Rosenkavalier and Ariadne auf Naxos. Obviously, Strauss was not suffering from writer’s block, and some might say that his orchestral writing reached its peak in particular passages of Rosenkavalier, but he remained unable to find a convincing way to produce purely instrumental compositions.

Some biographers have cited the death of Gustav Mahler as a catalyst for the completion of the Alpine Symphony. The two men couldn’t have been more different in temperament or cultural orientation. Mahler was explosive, outwardly passionate and Jewish, while Strauss was measured, domesticated and (later) a favored composer of the Nazi regime. Both men, however, were intent on expanding the palette of purely symphonic music to include the discoveries in harmony, melody and orchestration found in the works of Richard Wagner, something the composers of the Neudeutsche Schule (New German School), primarily Franz Liszt, had achieved with varying success.

From a modern perspective, little seems to stand in the way of symphonic composers integrating Wagner’s discoveries into their own work, but perhaps it bears stating the obvious: Wagner was primarily a composer of operas, where thematic, harmonic and orchestration choices — no matter how daring or outlandish for their time — all served to reflect the psychological and emotional dimensions of the libretto. Without words to guide them through the thousands of musical choices at hand, instrumental composers of the time felt shaky, at best, if their imagination started to venture beyond their understanding of music theory. 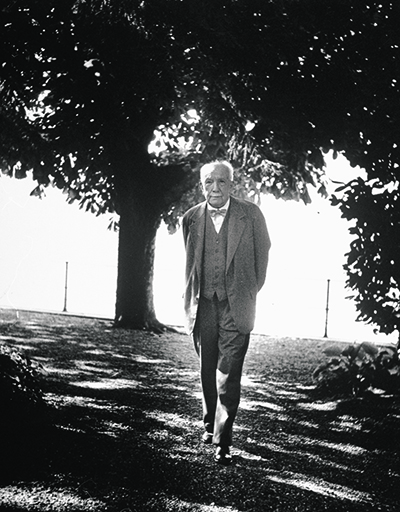 It was Liszt who found a work-around by inventing the tone poem, which replaced the guiding force of the libretto with a work of poetry. While the text of the poem was not actually sung, it served as a lattice over which the imagination of the composer could coil and twist, and if the poem was of the epic variety, the tone poem could incorporate the narrative structure (exposition–rising action–climax–resolution) to which we’ve grown accustomed in classical music and other mediums like literature. The tone poem served as a subgenre of program music, which could reflect anything in the natural world as well as text. The tone poem, however, was expressly concerned with expressing the integrity of a single work of art, such as a poem, in purely musical means. For the moment, a crisis in the progress of Western music had been averted.

Mahler and Strauss understood, however, that tone poems could only serve as a stopgap measure. Both men knew that music had to operate under its own rules, and that no matter how outlandish the musical substance or effect derived from poetic inspiration, there had to be a musical reason to justify its existence. The two composers approached this problem from different angles: Mahler began with programmatic symphonies, but moved further and further toward imbuing them with the orchestral color and harmonic adventurousness of the tone poem, while Strauss borrowed formal restraint from the symphony and variation forms to impose greater and greater formal structure on the tone poem. With Mahler’s passing, Strauss felt a greater urgency to find a solution to the problem of writing program music that could be as self-sufficient as absolute music.

Strauss was also undergoing a personal transformation. Even though he would describe himself as a second-rate composer, he did make efforts to involve himself in the intellectual and philosophical movements of his time. Nietzsche, whose friendship with Wagner and work in philosophy overshadowed Strauss’s own work as a composer, was an important influence in the shaping of Strauss’s spiritual orientation. Questioning the necessity of God or Christianity in realizing one’s human potential, Nietzsche’s writing had already inspired Strauss to create Also Sprach Zarathustra. But his lasting effect on Strauss was to shake loose the bonds of formal religion, which allowed the composer to separate the religious experience from religion itself. Therein lies the key to Alpine Symphony, a work that Strauss originally intended to call Der Antichrist, after another Nietzsche book. What Strauss was looking for, and achieved in Alpine Symphony, was to capture in music the narrative that underlies all of Western classical music, without tying it to any particular story or verse. This is not simply a philosophical treatise, but Strauss in all his glory, with the soaring melodies, rich harmonies and dazzling orchestration we’ve come to expect from the master. The fact that he managed to turn the genre of the tone poem on its head is by no means the only reason to listen to the work, but the mere fact that he achieved something akin to a plotless narrative is worth the listen.

The simple “up the hill, down the hill” program of the Alpine Symphony seems almost trite, but like Joseph Campbell’s Hero with a Thousand Faces, the myths of all civilizations seem to follow a pattern not unlike the journey of Strauss’s climber. An excerpt from the composer’s diary, written after hearing the news of Mahler’s death, seems to make it clear that Strauss was seeking nothing less than a revolution in the spirit of man:

The death of this aspiring, idealistic, energetic artist [is] a grave loss. . . . Mahler, the Jew, could achieve elevation in Christianity. As an old man the hero Wagner returned to it under the influence of Schopenhauer. It is clear to me that the German nation will achieve new creative energy only by liberating itself from Christianity. . . . I shall call my alpine symphony Der Antichrist, since it represents moral purification through one’s own strength, liberation through work, and worship of eternal, magnificent nature.