Wheel’s on fire. A promising composer, Rott was driven to madness before succumbing to tuberculosis at the age of twenty-six.

As far as Western history books are concerned, not a lot happened in 1884. If you were Vietnamese, you might have taken issue with the French conquering your country (which they called Cochinchina). If you were Charles George Gordon, you might have cared about Khartoum, and what a damned inconvenient place it was. If you were a fan of that newfangled European sport “football” and lived in the East Midlands area of England, you might have cheered the founding of the Derby football club . . . and regretted it soon thereafter, when Derby County turned in the worst season in the history of English football. Gustav Mahler, who didn’t follow English football or French colonial policy too closely, cared about 1884 for an even less notable event: the death of Hans Rott, the greatest symphonist who never was.

Rott was Anton Bruckner’s favorite student and admired by his classmate Mahler. But he was forgotten until the 1980s, when musicologist Paul Banks, spurred on by a quote of Mahler’s, found Rott’s principal surviving work, the Symphony in E major, in the archives of the Austrian National Library. Along with this grandiose symphony, Banks unearthed a tantalizing and saucy story of “what-ifs,” geniality and madness.

Hans Rott’s picaresque story starts with his mother, the eighteen-year-old soubrette Rosalia Lutz, whose dalliance with the fifty-one-year-old, married actor Carl Mathias Roth led to the birth of Hans in 1858. After Herr Roth’s wife died, he married Rosalia and legitimized four-year-old Hans. While he was at it, he also legitimized Hans’ little half-brother Karl, the result of Rosalia’s acquaintance with Archduke Wilhelm Franz. When Hans was fourteen, his beloved mother — he adored her but was aware of her spotty reputation — died. Four years later his father followed, leaving Rott orphaned before he finished college.

Rott had begun his musical studies with the tentative support of his father in 1874. His organ teacher was the great Austrian symphonist Anton Bruckner, whose work, while rooted in the formal traditions of Beethoven and Schubert, was inflected with Wagnerian harmony and orchestration. Bruckner thought very highly of his student and later proclaimed to a group of fellow teachers who had been deriding a Rott composition: “You will hear great things yet of this man!” It wasn’t Rott the world would hear of, however, but two of his fellow students: Hugo Wolf and Gustav Mahler.

Rott’s story took a turn for the bizarre in September of 1880, when the volatile composer sought to show Johannes Brahms his symphony. The already famous Brahms (forty-eight at the time, with two symphonies and one piano concerto under his belt) was part of the commission that would judge whether Rott qualified for a government stipend — a stipend that the ambitious but impoverished young man desperately needed. Brahms took a bite out of Rott with merciless criticism and unwittingly triggered the breakdown of the already troubled young composer, allegedly accusing Rott of plagiarism and suggesting that the symphony contained so many trivialities and nonsense that the extant moments of great beauty couldn’t possibly be Rott’s own.

A few weeks later, desperate and on his way to take a job as a choir director in the Alsatian town of Mulhouse, Rott pulled out a gun on the train to keep a fellow traveler from lighting a cigar. Brahms, Rott claimed, had laced the coach with dynamite! It would have been funny had it not been so tragic. Forty-four months later, on June 23, 1884, after confinement in the state asylum of Lower Austria and several suicide attempts, Hans Rott died of tuberculosis at the age of twenty-six.

After Rott’s death, Mahler had these very flattering words to say about his former classmate:

It is impossible to estimate the loss that music has suffered. Consider the heights of genius to which his First Symphony rises, a work he wrote at the mere age of twenty and which makes him, without exaggeration, the founder of the new symphony as I understand it. Of course, he doesn’t quite reach what he aimed for. It is as if someone wound up for the farthest of throws and then, just a bit clumsy still, misses the target by some measure. But I know what he aims at. Indeed, he so relates to my innermost, that he and I seem to me as two fruits of the same tree, created from the same earth, nourished by the same air. I could have benefited so much from him and maybe the two of us would have exhausted the contents of this new time that then dawned for music. 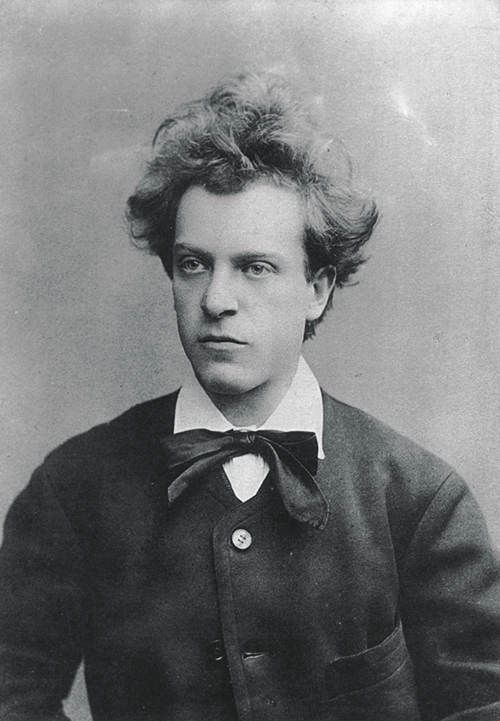 ‘If Mahler lived today, he would be sued for plagiarism’

Mahler’s praise was what led Paul Banks, in the 1980s, to go digging for and eventually unearth Rott’s Symphony in E major. Mahler had known its score well; allegedly he even wanted to perform it, though he never did. But until its premiere by Gerhard Samuel in Cincinnati with a student orchestra in 1989, no one had ever heard the full piece. When it was finally heard, the similarity between some of its sections and portions of Mahler’s first two symphonies was more than just casual. It turned out that Mahler had taken more than just inspiration from Rott’s premature symphony; he also took a couple of very distinct bars of music and grafted them into his own. Most damningly, Rott had composed his symphony four years before Mahler set about composing his (official) first.

In the wake of this revelation, Mahler’s lavish praise seemed motivated less by friendship between the two composers and more by a touch of guilt and the desire to do right by a composer to whom he owed rather more than he cared to admit. By the time Mahler eulogized Rott, the latter was dead and the former well established, so there was no harm in praising the colleague so tragically cut out of life. And who would ever find out that Mahler and Rott didn’t just “relate to the other’s innermost” in a purely hypothetical, ideal way?

Paavo Järvi, one of the conductors who has helped Rott’s work to a mini-renaissance in the last few years, isn’t afraid of laying into Mahler for this early-career “borrowing”:

Literally, I think, that it is a historic crime . . . that Mahler, who never acknowledged any influence of Rott . . . took literal quotes from the symphony and placed it in different parts of his. That’s not to mention all the dramatic gestures, not to mention these bleak moments of woodwinds, not to mention the chorales that reappear in the Second Symphony. Or the Scherzo, I mean, really! Where are all those Ländlers coming from? Those are not just quotes, but would-be signature items of Mahler’s style.What this is, really, is a historic case of plagiarism. If Mahler lived today, he would be sued for plagiarism.

But the plagiarism charge could go both ways: listening to the Symphony in E is a bit like playing a game of “Guess That Composer.” Every Romantic composer within reach was fair game for Rott, who put them all into his composition, a work so ambitious and ominously “grand” that his circle of friends referred to it simply as “The Symphony.” Rott, a member of the local Wagner Society, was fully under that dynamic composer’s spell. In 1876 he had attended the first Bayreuth Festival, and his earlier compositions were so drenched in the Wagnerian vernacular that his teachers had asked him to tone it down a bit. In the symphony one can hear bits of Fliegende Holländer, Meistersinger, Rheingold and Götterdämmerung. But Bruckner’s influence also looms large, and there is also some Schumann, and in the fourth movement we happen upon Brahms. In fact, the quote from the Finale of Brahms’ First Symphony (composed just four years earlier) is so audacious that Brahms could not possibly have been amused when he came across it. It isn’t hard to imagine that Brahms thought it was a send-up by the young “Wagnerian” composer, rather than an earnest tribute, and it isn’t hard to imagine Brahms launching into the merciless criticism that inadvertently became a focal point for Rott’s obsession and breakdown.

‘Consider the heights of genius to which his First Symphony rises, a work... which makes him, without exaggeration, the founder of the new symphony as I understand it.’

I got a fever, and the only prescription is more triangle

If it weren’t for the fact that Rott composed his symphony before Mahler started his, we might think of Rott as a copycat, pure and simple — not the raw talent that approached and anticipated the genius of Mahler. It is that proto-Mahler status that has helped propel the Symphony in E in the last few years onto the stages of the great concert houses of Berlin, Salzburg, Frankfurt and Dresden, to name just a few. We wouldn’t be listening to his music now if Mahler had come before him, even though the music would be the same. That would be our loss, because to reduce Rott to proto-Mahlerism means selling his symphony short. As Järvi suggests, “There are certain gestures that had never been heard and were always credited to Mahler when they are actually Rott’s invention. And then there is the way he uses chorales, which is new and entirely different from Bruckner.” More than that, there are few works in the repertoire of such unbridled enthusiasm and untempered eagerness. The symphony flounces on the maiden snow of orchestral romanticism like an overexcited puppy with enormous paws, and it’s simply impossible to chastise the work or its creator for such youthful exuberance.

Most excited of all is the triangle, symptomatic of the style of the symphony. The triangle is, after all, a classical composer’s tool for making his symphonic dog’s tail wag. And once Rott starts triangling, he doesn’t stop. The instrument makes itself heard during well over a third of the symphony, ringing for more than half of the last two movements — for over six hundred bars, out of fifteen hundred — and most of that at or above fortissimo. A percussionist who sees this as the glory moment of his career could create an effect quite like that of a doorbell being stuck. The conductor is well advised to cold-heartedly rein him or her in.

There have been at least seven recordings of Rott’s Symphony in E major since the pioneering 1989 CD release of Gerhard Samuel with the Cincinnati Philharmonia Orchestra (Hyperion, now Helios). Not all are available anymore, while others are scheduled to appear as the work becomes increasingly popular. In just the last two years, the Symphony in E has become the most requested score for its publishers, Ries and Erler. Järvi, for example, is looking for a label to release the recording of his (terrific) performance at the Frankfurt Old Opera. When it comes out, it will be a strong contender. Meanwhile, I like Stefan Weigle’s account on Arte Nova for how it deals with the work’s strengths and weaknesses.

Triangle-overkill, lopsidedness and naïve pomposity are not the symphony’s only flaws, but Hans Rott would undoubtedly have improved with increasing skill, experience and maturity had he been allowed a longer career. And what we do get is a cornucopia full of ideas, most of them beautifully welded together. In that, it’s a lot more fun than many a “proper” symphony by composers who had much more time to hone their skills. About Rott, in an inversion of Grillparzer’s Schubert epitaph, it might be said: “The Art of Music here entombed such fair hopes, but also such rich possessions.”