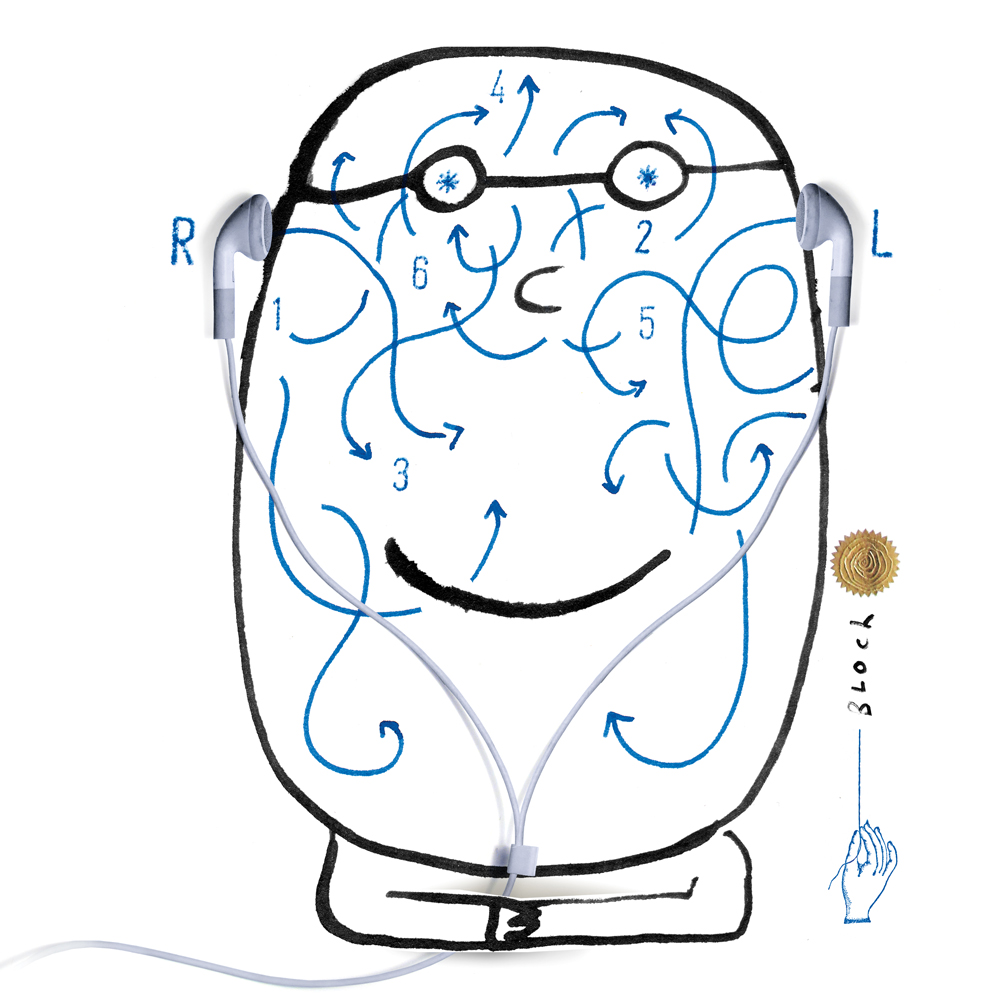 If you’re like most enthusiastic listeners, you probably own a portable MP3 player and listen to your favorite tunes as you commute, exercise or relax at home. And you’ve probably read magazine articles on how these gadgets have changed the world, from crippling the record industry and rendering the sale of CDs and DVDs irrelevant, to offering independent music producers (hip-hop artists and chamber music groups alike) instant access to a market previously held by four or five multinational corporations.

But could the iPod have an impact on the composition of classical music? Specifically, could a composer’s ability to easily and randomly “shuffle” bits and pieces of his previous works — serious and casual, early and later pieces — create novel associations, spark new creative decisions or affect his choice of material?

The answer is “of course,” since this jumbled approach to music making has already been investigated by many classical composers, in particular twentieth-century artists who explored what is now called postmodernism. Though the term is almost intentionally vague, one thing can be definitively said about postmodern music: all of its composers shared an ahistorical approach to their material, believing that the entire canon of Western music, with all its various styles and epochs, could be shuffled to create something new.

These compositions tend to fall into two categories: those that mix styles of music from movement to movement and those that mix styles within a movement. A work in the latter category resembles something closer to a remix, complete with cross-fades, splice cuts and dreamlike chaos — as in the Scherzo movement from Luciano Berio’s Sinfonia or Alfred Schnittke’s Concerto Grosso No. 1 — while the former comes closest to the experience of listening to a shuffled iPod.

George Rochberg’s String Quartet No. 3, from 1971, is a work that exemplifies this former polystylistic approach, though Rochberg actually went one step further: instead of simple stylistic mimicry, he appropriated the specific voices of other composers. The movements of this quartet don't just sound Romantic or modern in style, they actually sound like lost pieces of Beethoven and Bartók.

How did this composer end up intentionally writing in someone else’s style? During the years after the war, within the ranks of serious composers, a high priority was placed on technique, and Rochberg’s early music was characterized by a severely disciplined form of serialism. But in 1964 he was confronted by the death of his son, and the composer found himself unable to express his grief in his chosen idiom. His compositional voice slowly went mute. He would find it again only by examining the very nature of style in music.

The function of a new work often dictates which stylistic choices are open to its composer. An international style, embodying traits of austerity, symmetry and harmony, might be better suited to a Roman Catholic Mass from the Renaissance period, while a piano virtuoso in the post-Napoleonic era might favor a work displaying an individual, heroic voice, replete with bold modulations and battle-inspired themes. Just as we select music to suit our moods and tastes, composers choose their materials and techniques to produce desired emotional perspectives. Rochberg’s masterstroke was to identify the circumscriptive nature of all styles, and recognize that if he were to avoid another compositional crisis, he would have to forgo an allegiance to any style of music.

No, it’s a Rochberg. George Rochberg wrote in the styles of other composers to express his innermost thoughts.
Rewriting history. Stravinsky’s Agon features the many musical styles of the composer’s long career.

Rochberg must have been a man of keen self-awareness, for while the door was completely open to him to explore any and all styles of music, he also knew that his expertise resided within the realm of Western classical repertoire. Failure to recognize this might have resulted in a work like Bernstein’s Mass, where the composer’s dabbling in 1960s pop resonates as feeble and inauthentic next to the contemporaneous work of The Beatles or Brian Wilson. Rochberg realized that there was enough variety within classical music to suit his own needs, and his training had prepared him to compose in virtually any style within that genre.

Appropriating the styles of Beethoven and Bartók permitted Rochberg to draw from an extremely wide palette of compositional materials. The chords (tonal to atonal), rhythms (refined to the barbaric) and textures (choral and contrapuntal) virtually encompassed the whole of Western music, which Rochberg could now deploy in any manner according to his expressive needs.

Hearing Rochberg’s String Quartet No. 3 on an iPod might confound unwary listeners, leading them to believe they were hearing the work of several different composers shuffled from various albums. In live performance, however, these changes in style succeed, thanks to the sheer power of Rochberg’s music, which sweeps the listener along its narrative arc. “Narrative” here does not refer to a specific program or story that the work is trying to recount, but rather to the elements of struggle, climax and resolution that belie our Western aesthetic. I will refrain from saying that Rochberg manages to “channel” Beethoven’s spirit, but the effect of his slow movement evokes a transcendental air that adds up to much more than the notes on the page. Rochberg, with his fastidious training as a composer, could not resist the opportunity to create hints of large-scale unity, and he masterfully connects the movements with reccurring motives that appear regardless of the texture or style.

Other composers have made similar attempts to write large-scale works that balance stylistic diversity and compositional unity. Stravinsky, for whom the exploration of style was a creative preoccupation over the course of a very long career, also tried his hand at postmodern composition in the ballet Agon (1957). The piece has always been regarded as somewhat of a transitional work for Stravinsky — not quite tonal, but neither fully serial. The changing of style from movement to movement has been seen as one of the work’s chief weaknesses. However, like many great works of art, the surface only tells part of the story. Stravinsky effectively supersedes the whole argument of tonal versus atonal music by demonstrating that these opposite worlds paradoxically share the same roots, a concept not widely held at the time of the work’s composition.

‘As listeners, we search for meaningful connections between what we’ve just heard and what might come next.’

Stravinsky always said Agon was a ballet without a plot, but to my ears, the work seems to recount the whole history of Stravinsky’s career as a composer. Stravinsky had lived so long by the time he composed Agon that he didn’t have to adopt another composer’s voice to change styles, as Rochberg did. In fact, Stravinsky had changed styles so many times during his own career that he was able to reference himself, at once giving the work a diverse surface while always sounding like “authentic Stravinsky.” The stylistic changes almost mirror the chronology of his own evolution: Russian (Pas de quatre), shades of L’histoire du soldat (the first Pas de trois), exploring the past (Galliarde) and contrapuntal experiments (the second Pas de trois), culminating in the Bransle Double, written in a style reminiscent of his archrival, Arnold Schoenberg.

Schoenberg and his pupil Anton Webern had made deep impressions on Stravinsky through Robert Craft, then a young American conductor who championed the music of both Stravinsky and the Second Viennese School, and who later became Stravinsky’s personal assistant. It was clear after the war that young composers saw Webern as a model for the future of music, with Stravinsky being horribly out of date and even backwards in his approach to harmony and form. Stravinsky himself began to view Webern and Schoenberg with awe, which led to his own compositional crisis. Would the acceptance of this forward-looking style mean the rejection of the previous four decades of work? His solution was nothing short of astonishing.

After the Pas de deux — the most lilting, languid and decidedly un-Stravinskian passage of Agon — the composer begins to introduce various elements that reassert his musical personality — metronomic pulse, stuttering chords and the recently acquired penchant for imitation. By the time we reach the work’s penultimate section, we feel Stravinsky’s presence, but can’t yet quite recognize him. Stravinsky begins the Four Duos movement using Schoenberg’s twelve-tone technique, presented as an unadorned linear statement. The texture builds over the Four Trios into a contrapuntal texture reminiscent of Schoenberg’s mature works, only to be cut off by a return of the Four Duos music. The unaccompanied walking bass, visually resembling the classical transformations of Schoenberg’s twelve-tone rows, is interrupted by muted French horns, intoning a very Stravinskian series of stuttering chords. Without oversimplifying this music, one would be hard pressed to find musical elements that represent each composer in such a succinct manner. The chords, actually drawn from the movement’s twelve-tone row, also recall the opening of the ballet, and just as the listener makes this association, Stravinsky recapitulates the opening movement of the work. The various opposites that the composer invokes — tonal and atonal, past and future, even personal history and collective history — are all shown to be two sides of the same coin. Stravinsky was seventy-five when he completed this work — a full fifteen years before Rochberg’s quartet.

In his essays on creativity, physicist David Bohm writes that it is man’s nature to assimilate his experience, to find a meaningful whole out of the disparate stimuli we constantly experience through our senses. On the surface, Rochberg’s String Quartet No. 3, Stravinksy’s Agon and the iPod’s shuffle function all appear to offer an equivalent listening experience: a succession of pieces varying in style to a lesser or greater degree. One of the vehicles for the “assimilation” that Bohm refers to might be our search for narrative. As listeners, we search for meaningful connections between what we’ve just heard and what might come next. Rochberg and Stravinsky brought many years of skill and training to the fashioning of large-scale works, guiding the listener through various forms, textures and, in this case, styles, to create a satisfying experience. The iPod has no such guiding hand. If we find pleasure in listening to a shuffled playlist, it may be because we are assimilating that experience by creating our own narrative, our own story to fit the changing music. These postmodern works by Rochberg and Stravinsky predate the iPod by more than several decades, and the assimilation by the listener of the polystylistic surfaces in the String Quartet No. 3 and Agon is not just an idle wish on the part of the composers, but something they actually composed into the work. By creating motivic connections between movements, they revealed the underlying paradox of our musical perceptions: that a work can be a series of seemingly disparate pieces born from the same material.