Fans of the Rolling Stones might — if they are fluent in the rarest of their ephemera — know the name Julius Katchen, the only classical musician ever to be featured on their spirited television program Rock and Roll Circus. Katchen’s appearance, playing De Falla and Mozart, was, alas, destined for the cutting-room floor until three decades later, when one can now view it on reissue. That fact alone speaks volumes about the vivid personality of the now-largely-forgotten Katchen, a kind of rock ‘n’ roll spirit in the form of a brilliant classical musician, replete with an early death at age forty-two. In life, he could be pugnacious as well as punctilious, and this set demonstrates his range — this is not a box about pianistic perfection, but rather about exploring the complete, important and complicated legacy of an imperfect but essential artist. Ned Rorem, whose excellent Second Piano Sonata was commissioned and championed by the pianist, says of Katchen’s legendary fluency and memory: “To assume that his freak gift for quick mastery was a casual process is to ignore that our gifts in the long run are paid for; sometimes the price is terrifying. Julius Katchen worked very hard. His vitality was such that after some twelve hours of practice he could go out and make the rounds of bars with the rest of us, get up early the next day and start again.” In the end, despite Rorem’s insistence that he “lived three lives in one,” the vigorous child prodigy that was Julius Katchen left too soon. Fortunately this incomplete life came well documented.

Decca has gifted us, as they so often do, with a handsomely packaged and sonically thorough reissuing of all the recordings Katchen made for that label, and within it is the joy of discovery for most, and rediscovery for some — the Katchen reconstruction is well aided by Cyrus Meher-Homji’s excellent liner notes. We get to meet this pianist head on, especially in the German Romantic repertoire, shepherded to his interpretations by the opening (and deeply true) pull quote from pianist–composer Jed Distler noting that Katchen “swam through the romantic repertoire like Mark Spitz and Esther Williams tag-teamed.”

There are two recordings of Beethoven’s Diabelli variations, for example, which stand as a kind of Scylla and Charybdis of interpretations — neither superior, both quite good for the most part (if occasionally big for the sake of being big), and worthy of cautious study by anyone interested in pianism because his signature sound is often wrought at the expense of the interpretation. Sometimes he sounds like a virtuoso; other times he sounds like a “virtuoso.” But in the odd imperfection of these recordings, a real force of personality is always present. His antic performance of Beethoven’s six Bagatelles — masterpieces as tiny as the sonatas are grandiloquent — is both restrained and hysterical, a truly poetic reading. 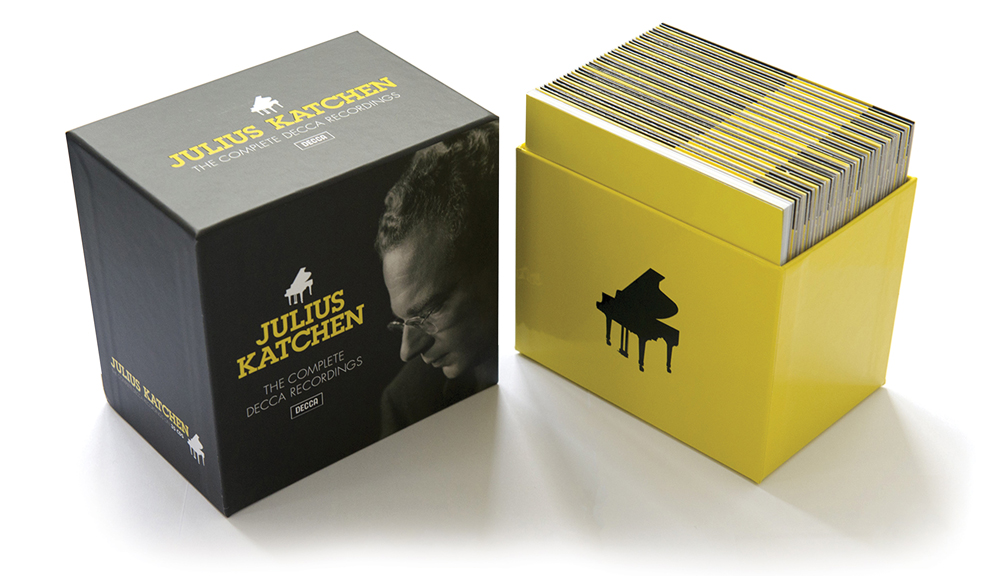 His sound is well suited to Stravinsky, especially the near piano concerto that is Pétrouchka. Were Brahms available in Stravinsky’s day to take the piano part, it might have sounded a lot like this. And the same applies for his excellently energetic and — again — virtuoso-with-a-capital-‘V’ reading of Beethoven’s “Emperor” Concerto, accompanied by Piero Gamba and the London Symphony Orchestra. It is quite the gift that we can hear Benjamin Britten’s charming (yet sub-rosa seething) Diversions with the conductor at the helm in this especially forceful and clear iteration. And while one can (and likely should) object to the overall Mantovani-ness of Mantovani’s curious, soupy reconfiguration of Gershwin’s Rhapsody in Blue (to which Katchen acquits himself nobly), it stands as a fascinating document and excellent addition to this box, even if listening might necessitate a shower.

Composer Ned Rorem, a close friend of the pianist, wrote Katchen a delightful and delicate sonata, and perhaps this release will aid in its wider dissemination. The opening movement, demanding a tone that is both serenely crystalline and somewhat grand and antic, shows Katchen at his level best: ardent lyricism coupled with a deep generous tone. The resolute clarity of the jaunty second movement (both from the composer and the performer) is a joy, as is the manic ragtime effusiveness of the closing Toccata.

But it is Brahms that holds Katchen’s heart most deeply, and his epic recording of all three of his piano trios — with no less than violinist Josef Suk and cellist János Starker — are worth the price of admission. What documents, these, as are his collaborations with Suk on the three violin sonatas and the lone cello sonata with Starker, which was part of a complete sequence cut short by the pianist’s untimely death. Decca did make available the pianist’s complete tour through the solo works in a previous box, so there is some overlap. But this is the repertoire, it seems, dearest to Katchen’s heart and fingers — and it shows. Here the shame of his early death is apparent: had Katchen had the lifetime to devote to thinking and rethinking, it might have resulted in the perfect Brahms playing — the sound he aims for, both clear and yet supra-Russian big, is ideally suited to it. His Paganini Variations rivals Claudio Arrau’s for sheer moxie, but with a bigger and more rough-around-the-edges sound.